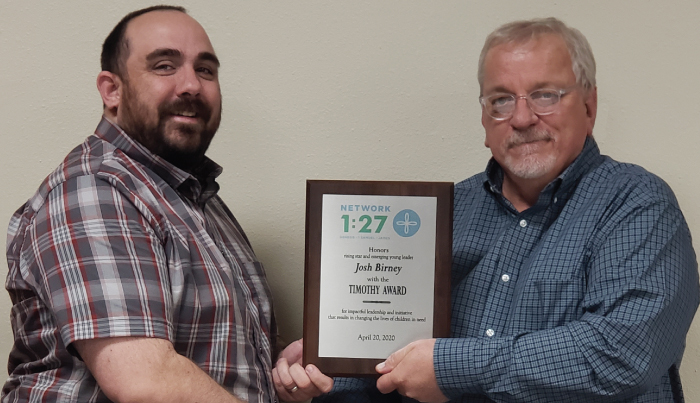 At the Westview Boys’ Home board meeting today, Network 1:27 honored Josh Birney, Westview’s manager of social services, with its Timothy Award. This award honors those considered to be a “rising star and emerging young leader” in the care of children and families in the United States. Network 1:27 is a national organization of faith-based agencies serving children and their families.

The award cites Josh for “impactful leadership and initiative that results in changing the lives of children in need.” Josh has been deeply involved in work with young men from hard places since he and his wife, Julia, came to Westview in 2007 as caregivers. After eight years of service in that role, Josh moved into Westview administration.

Josh has since become a TBRI®  (Trust-Based Relational Intervention) Practitioner and has been instrumental in fully implementing the use of this evidence-based methodology in the work at Westview. He has also trained workers at other residential childcare facilities to help children with this powerful methodology.

Ron Bruner, Westview’s executive director, observed that “Josh is precisely the kind of young professional this award was intended to honor. He is certainly one of the most deserving recipients of the Timothy Award I have known.”

Originally the award was to have been given to Josh at the Network 1:27 conference in April; unfortunately, that meeting was canceled because of the COVID-19 pandemic. The Westview board was glad to add this award to their agenda at their October meeting so that they could honor Josh’s service to the young men at Westview.